The Gift of Story

At twenty-two, I found a job as an administrative assistant, for a tele communications company two blocks from the World Trade center, soon after my almost year in Colombia. A job I worked in order to have a steady pay check, while I figured what I wanted to do with my life. As I contemplated what to do next, I read several books a week at my desk, wrote in my journal, and looked up writing possibilities on yahoo search engine. I stumbled upon the 92Y creative writing program, and signed up to take a class. It was the first writing class I took outside of college. Delighted with my teacher, and her mild-mannered tone, and the careful notes she jotted in her small script, always in green ink.  I signed up for another fiction writing class with her at the New School through the continuing education program. It was somewhere in between that I came across a spoken word event at a high school in lower Manhattan. I went on my own, sat in the crowd, and marveled at every artist that performed. At the train station on my way home, pressed against a column, my eyes fixed on the dark tunnel, I wondered if I’d ever be brave to share my words in front of a crowd.

And, with every tug and twist of life, I grew distant from my writing dream. Near two decades later, I still wondered if I’d ever follow my dream. Write. Move others with my words. Inspire. Make them believe. Only now, I understand, first I had to believe in myself.

Last year in mid December, my dear friend and VONA sis, Yesenia sent me a message, selected as a finalist for the Brooklyn Nonfiction Award, she asked if I could come and watch her read. Unable to attend because of a parent obligation for my son, I told Yesenia, my money was on her. I believed in her. The next morning, I reached out to Yesenia, she had won. Excited for her, I told her she inspired me. I prayed to El Divino Nino for the courage to live the life of a writer. 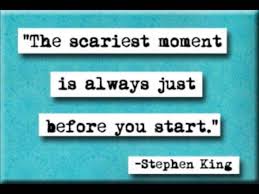 That Wednesday at writing group, Kerri, came with copies of Stephan King’s, On Writing for all the members. A Christmas gift. Later, a blue print. I held the book in my hands, and looked at the new black and white cover. I owned this book. My writing teacher, Colleen Cruz, a huge Stephan King fan recommended it years ago. I purchased it, and never read it, not one page. Determined to be better, I read the book before the start of the new year. I sat on the corner of my sofa underlined the text, jotted notes in the margins, re read sentences a loud, and when finished I typed up two pages of single spaced notes. And, shared them with my writing friends.

At the end of last year, I committed to the 52 essays challenge for 2017 led by VONA Vanessa Martir, fellow VONA alum, staff, and kick ass writing teacher. I worried how I would make time to write these essays with an already tight schedule as a teacher, mother, wife, daughter, friend, and gym devotee. Not to mention, I continued to write my novel, along with these essays. Surprised by how I began to see cracks of time in my everyday to write, and when those cracks were not enough I pulled them further apart, and created space. And, I wrote essay after essay, continued to work on my novel, and was contacted by the founder of hispanedotes.com. Asked if I would like to be a staff writer for the startup Latinx literary online magazine, I agreed.  While I completed applications to writing programs or conferences, which later became my summer of writing. The summer I turned forty, I attended my second VONA, a week at NYPL Cullman Center Institute for Teachers, and five days at Las Dos Brujas. In the fall, I applied to a craft intensive with Tin House, and was accepted, applied to two writing mentorship programs, which I did not get accepted into. Inspired by Yesenia’s post that rejections are affirmations you are doing the work, I followed suit. And, posted one of my rejection letters for the mentorship program on social media, and the next day was contacted by a YA author, Francisco Stork, who had read my blog, and offered to be my mentor.  Thrilled I accepted, and cried with joy. I reached out to Yesenia and Elizabeth, my VONA 2017 fiction crew, and called my husband and Mami to share the news.

Ready now. Creative momentum, of having figured the end of my novel, I sought opportunities to submit my work, essays, short stories, flash fiction. I sent to literary magazines, contests, worked on my writing till late at night or an hour before my family awakened on weekday mornings.  First, I noticed the Brooklyn Nonfiction Prize writing contest in Poets and Writers, and then encouraged by both Yesenia and Elizabeth, I submitted. I crossed myself and whispered to God, as has become my custom: let this be Your will. You know the desires of my heart. I want to live the life of a writer.

On this past Wednesday night, choosen as one of the finalist for the Brooklyn Nonfiction 2017 Prize. I read like a boss. Needless to say, I had practiced hella of a lot. And, during all those rehearsals of my reading, I realized something I suspected, but now knew for certain. Story is the most powerful weapon you can arm yourself with. I read an excerpt of my essay to my grade colleagues during our lunch hour, my students, family, neighbor and friend, and then an audience of other writers and their family, the presenter and judges of the Brooklyn Nonfiction Prize, including my family, writing teacher and writing group members. And, everytime I looked up, I was greeted by eyes filled with the hues of wonder and awe. A slice of my story growing up in Sunset Park Brooklyn moved others. 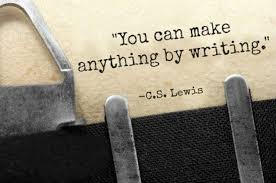 In order to read my writing I searched for inspiration in the words and the stories of others. I pumped myself up by listening to my favorite poeta, Elisabet Velsaquez, the mornings on my way to work days before the reading. Throughout those days I prayed, asked my ancestors to join me on the stage. I read for my illiterate abuela Repa, for my mother that never went to school a day in her life, my paternal abuela a soft-spoken mulatta I never met, and mi primo Francisco.

I did not win the prize that night. But, I left there a winner. I got a taste of the writing life. Other writers and audience member came up to me to tell me how much they loved my work. The winner came up, told me my essay took him back to when he was a rookie cop, and Sunset Park was where he was sent at times. Yes, long ago it was broken and run down, crime filled, his eyes sad as he said, “they use to call the people from Sunset Park the dirty ones.” We hugged, and encouraged each other to keep on writing. I made two writing friends that night, other writers of color. I told them about VONA, and we have since sent each encouraging messages back and forth.

That night as I laid in bed, I recalled the events of just a few hours before. I saw admiration in my husband, daughter, and son’s eyes. My writing teacher, looked at me like a proud mother, and my heart swelled. Colleen believed in my writing long before I believed in me. My writing group members: Australia, Barbara, Kerri, and Sarah, huddled around me afterwards, their eyes filled with love and pride.

Then last night at my sister’s Christmas Eve get together, I read the same excerpt from my essay. Beside the Christmas tree, my family bunched up in my sister’s sala: Ruben, Holden, Rubencito, Joann, AJ, Gabi, Al, Al’s cousin Carlos, and his two young daughters. And, they held space for me, to reveal my heart. I looked up, saw the connection my words lassosed around them, like ropes used to bound, my words tugged at them, wrapped around them, and held them tight.

The gift of story.

One thing I learned this year, is that writers are chosen souls, the love of story poured first thing, and an essence formed. Later fitted with bodies, given family and friends tethered to, a life journey, which leads to a collection of stories. Writers speak their words, but echo the words of others. That spark, a recognition of self in someone else’s story, behind the words: you inspire me. It’s the greeting of souls set in motion long ago.

My Christmas gift to myself began almost a year ago, the gift of story, and life of a writer. 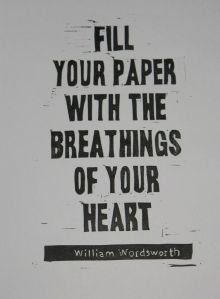 2 responses to “The Gift of Story”